From the Ion Age, some VERY interesting stuff.
Work is progressing upon the forth book in the series for Patrol Angis the 15mm scale space opera wargame from The Ion Age.  I over see all of the titles published by and going to be published by Alternative Armies and The Ion Age and such with several new titles ongoing the work on Baron has been slow. Sorry!  Baron will be a source book for the Prydian Precinct with a focus upon the Civil War and the Marcher Barons.  Within Baron one new faction will be introduced…The Starvaulters.  The best of the best and the true Knights of the Stellar Vastness who live by the Code Gallant. 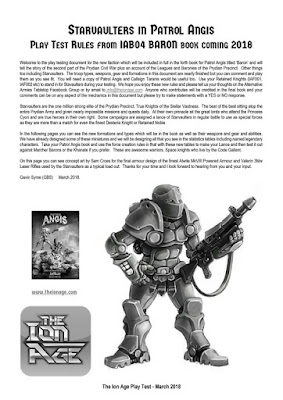 Do you want to try out the new rules?
In Baron this new faction is the only part of the book with all new game mechanics.  There are other new rules in the book too but these are smaller in scope and inserted into existing frameworks. The Starvaulters need some final testing.  We have done the initial play in house and have got them all but ready after two attempts but we are now offering a chance to field these knights to those interested.  Feedback upon the new troops, infantry scale vehicles, personalities, gear and skills is most welcome.  These are powerful troops.  Everything in the play test document will be featured in the final book and we are already making the miniatures too.  In fact in the document is an image of the first Starvaulter sculpts.  Every person who assists in the testing will be credited in the book.
If you wish to get the play testing document then go to the Alternative Armies Tabletop Gaming group on Facebook and download it from the post on the group where it is attached.  It will be there for the next several weeks and you are most welcome to come along and talk Patrol Angis.  Just apply to join our friendly group and then throw some dice.  As you would expect you do need a copy of Patrol Angis in print or digital to make use of the play test document.  You can find the game HERE on our website. 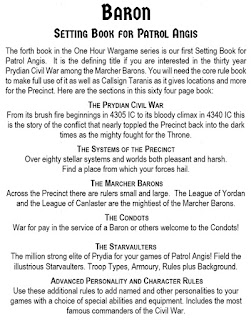 Baron has been slowly building up with me since last year and this is the final stage of testing needed for it.  See you on the group!
Thanks for Reading,
GBS